My current research activity is focused on the use of green solvents such as Ionic Liquids and Deep Eutectic Solvents for applications such as coal beneficiation, biomass dissolution, metal ion extraction, hydrogen energy generation and thermal energy storage. We adopt multiscale strategies which integrates molecular modelling design to process simulation for the development of industrial chemical products and processes. In all our studies prior to experiments, we perform Quantum Chemical predictions which includes COnductor like Screening MOdels for Real Solvents(COSMO-RS) and Molecular Dynamics(MD) simulations to screen the potential solvents. Recently our focus is on the use of naturally occurring Deep Eutectic Solvents(DES) as an alternative to conventional solvents and Ionic Liquids. DES are mixtures of quaternary ammonium salts with hydrogen bond donors (HBD) such as amines and carboxylic acids; and hydrogen bond acceptors (HBA) such as glycerol. 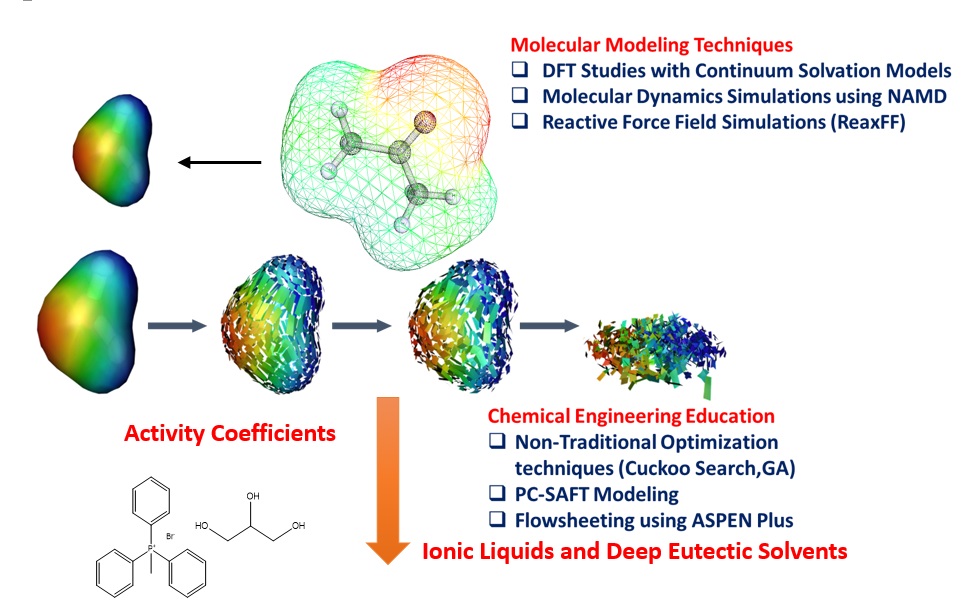 A brief description of my current research areas which includes Deep Eutectic Solvents are give below:

A. Dearomatization of Light Naptha and Kerosene Fractions with Deep Eutectic Solvents and Co-Solvents.

Food Grade Quality Hexane is a light distillate produced from special cut Naptha where the hexane rich is extracted and then ensured required specification. It is primarily used for solvent extraction units for vegetable oil and spices. According to the specification the limit of the benzene in the food grade Hexane should be <250 mg/kg after aromatic extraction. Hence separation of Benzene and Hexane is one of the most challenging tasks in the chemical industry. Traditional distillation is infeasible for the separation, because of their close boiling points and azeotrope formation. Extractive distillation or azeotropic distillation are complex and consume a substantial amount of energy. Hence focus is on both Liquid Liquid extraction using both conventional and greener solvents. Kerosene distillates from oil field (140-240 ºC) usually contain around 30-35% aromatics. Kerosene essentially rich in aromatics are extracted prior to its use as aviation fuel and illuminating kerosene. Low concentration of aromatics in kerosene is usually desired from straight run kerosene. Hence refining of kerosene fractions is performed to produce superior kerosene (SK) and aviation turbine fuel (ATF). These end products needs to meet the BIS specification which states the condition of smoke point, freezing point and aromatic content as the performance of the depends on these specifications. This is required as kerosene based detergents and jet aviation fuel requires aromatic content in ppm. One way is to open the ring of the aromatics for hydrogenation but then it uses severe operation conditions. Liquid Liquid Extraction is another method which selectively extract the aromatic moiety using solvents. Some of the conventional solvents include liquid sulphur dioxide, triethylene glycols, sulpholane, nitroalcohols and dimethyl sulphoxide. One such application concerning a Poly Aromatic Hydrocarbon extraction refers to the Scheme as below: 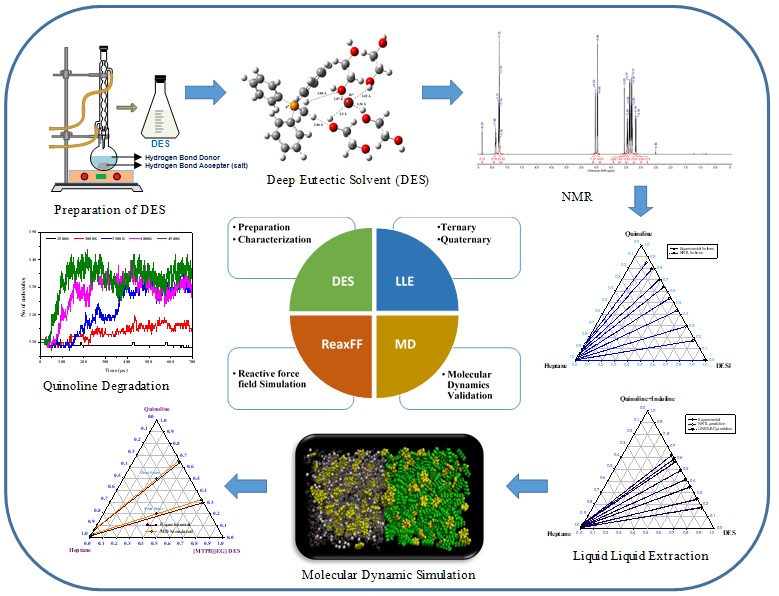 Another research aims to study extraction-based separation process to isolate bio-chemicals such as acetic acid, acetol and furfural from aqueous phase using Ionic Liquids as solvents. The selection of Ionic Liquids is based on the COSMO-RS model.The first step in the recovery of chemicals from bio-oil is primary fractionation by water where bio-oil is separated into less complex fractions and then using Liquid-liquid extraction targeted chemicals can be isolated from the phases derived from bio-oil. Accurate experimental data and reliable thermodynamic models are basic requirements for such optimized extraction process design. These have been achieved through multicomponent Liquid-liquid Equilibria measurements and subsequent validation through multiscale strategies such as Perturbed-Chain Statistical Associating Fluid Theory (PC-SAFT) and Monte Carlo Simulation.

B. Development of Cellulose, Hemicellulose and Cyclodextrin Based Hydrogels

Hydrogel is a three dimensional polymeric network with high degree of flexibility containing large amount of water. The polymeric structure originates due to the physical or chemical crosslinking of the precursors. Hydrogels retain water by hydration, osmotic or capillary forces which are counterbalanced by the forces exerted by the crosslinked structure to retain the network. The absorption of water depends on the internal transport and diffusion of network. The amount of entrapment depends on the external stimuli. Hydrogel resemble extracellular matrix due to the biocompatible nature of constituents, soft and rubbery structure and its high water retention capacity. For that, hydrogels are widely used in tissue engineering, cell encapsulation; and  controlled delivery of drug and biomolecules. Apart from the biomedical applications, the functional moieties of hydrogel poses active binding sites for metal ions and dyes, leading to its application as biosorbent.